Published on Jul View Download This publication does not purport to include all the necessary provisions of a contract. Users are responsible for its correct application. Compliance with a British Standard does not of itself confer immunity from legal obligations.

Summary of pagesThis document comprises a front cover, an inside front cover, the EN title page, pages 2 to 34, an inside back cover and a back cover. The BSI copyright notice displayed in this document indicates when the document was last issued. Amendments issued since publicationAmd. Up-to-date lists and bibliographical references concerning such national standards may be obtained on application to the Central Secretariat or to any CEN member. A version in any other language made by translation under the responsibility of a CEN member into its own language and notified to the Central Secretariat has the English versionSteel die forgings Tolerances on dimensions Part 1: Drop and vertical press forgingsrgees par estampage en acier es dimensionnelles Pieces executees a chaud sur x-pilons ou presses verticalesGesenkschmiedeteile aus Stahl MatoTeil 1: This European Standard shall be given the status of a national standard, either by publication of an identical text or by endorsement, at the latest by Marchand conflicting national standards shall be withdrawn at the latest by March This European Standard is considered to be a supporting standard to those application and product standards which in themselves support an essential safety requirement of a New Approach Directive and which make reference to this European Standard.

The first part of this European Standard applies to hot forgings in the delivery condition, made in carbon and alloy steels. The 10243–1 specified apply to forgings not exceeding kg in mass or 2 mm maximum dimension.

Tolerances for heavier or larger forgings shall be agreed at the time of enquiry and order.

This European Standard does not apply to upset forgings made on horizontal forging machines see EN These two grades of tolerances are identified as follows: While grade E close tolerances may be applied to all dimensions on one forging, it is more economical to apply them only to those specific dimensions on which closer tolerances are essential.

This grade should not be specified unless the additional forging cost entailed can be justified by a consequent saving in overall cost. The tables showing dimensional tolerances are based on the R20 series of preferred numbers see ISO 3.

Annex A gives for information some examples of the application of these tolerances for different types of closed die forgings. In such cases these standard tolerances can form only a basis on which to agree modifications appropriate eh the particular circumstances. Such requirements usually necessitate supplementary operations, e. Considerations of this nature, whilst frequently encountered, are highly individual, and vary widely.

They are best dealt with by consultation at the design stage and shall be agreed between the purchaser and the supplier. This approach will ensure that optimum use is made of 1043-1 forging process in fulfilling the purchaser’s special requirements at the lowest additional cost. These normative references are cited at the appropriate places in the text and the publications are listed hereafter.

The category of steel used is determined as being within one of the following: To determine the category in which a steel belongs, the maximum permitted content of the elements in the steel specification shall be the values used. Examples are shown of circular and non-circular forgings see Figure 2 and Figure 3. The shape complexity factor of a forging is the ratio of the mass of the forging to the mass1 of the enveloping shape necessary to accommodate the maximum dimensions of 1243-1 forging: The enveloping shape of a circular forging is the circumscribing cylinder, the mass of which is calculated from the formula see Figure 2: Up to and including 0,16;S3: Above 0,16 up to and including 0,32; S2: Above 0,32 up to and including enn S1: Above 0,63 dn to and including 1.

In such cases the factor S4 is used; the weight to be taken into consideration is only that of a cylinder having diameter d and height e. This special procedure is not applied if larger tolerances 102433-1 result from use of the normal procedure as shown in 4.

They are classified into four groups; accordingly each of them is displayed in the table. All variations, including those due to die wear and shrinkage, are included in the length, width and height tolerances. Figure 6 Type of dimensions10 BSI 12 January Length and width tolerances are to be applied in directions parallel to the main die line, or as nearly so as practical considerations will permit.

Length, width and height tolerances are shown 10243-11 Table 1 and Table 2 as applied to dimensions between external surfaces 12043-1 Figure 7i. 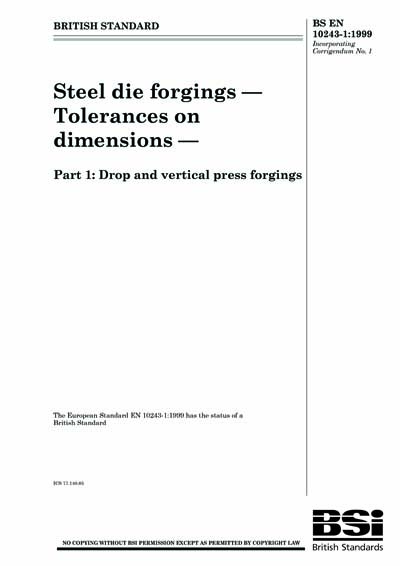 This should be done to obviate unnecessary minor variations between tolerances, thus facilitating drawing preparation and simplifying inspection procedures. In those instances where the variation is of importance e. The application of such tolerances should be kept to a minimum and, in these instances, the tolerances shall be indicated 102433-1 against the appropriate dimension s on the forging drawing. For dimensions from a centre to a surface see Figure 9 and for dimensions on steps within one die, the sn for the greatest length, width and height shall apply wherever possible.

Mismatch tolerances depend on the forging mass and on the shape of die line. They shall be taken from Table 1 and Table 2. Mismatch tolerances are applied independently of any other tolerances. In measuring sn, accuracy depends upon making due allowance for surplus metal caused by uneven die wear.

For that reason measurements should be 10234-1 at areas of the forging least affected by die wear. Formula for calculating mismatch: The positive residual flash and negative trimmed flash values permitted are given in Table 1 and Table 2. The residual flash is measured from the body of the forging to the trimmed edge of the flash, as indicated in Figure The position of the trimmed flat is measured relative to the theoretical point at which the draft 10423-1 meet see Figure Residual flash and trimmed flat tolerances are applied independently of, and in addition to, any other tolerances.

Normally the tolerances for the greatest dimension of length or diameter of the forging will be applied but, if more restrictive tolerances are required, those for the eh dimension of the pierced hole may be used. In the latter case the tolerances shall be indicated against the appropriate dimension on the forging drawing. All variations in thickness, due 10243-11 die-closure, die-wear and shrinkage are included in the thickness tolerances.

In the case of a forging having a flange from which projects: Base all thickness tolerances except those for overall thickness on dimension t shown above. In both cases, the permissible deviations 10243- be mentioned besides the relative measurements in the drawings of the forgings. These marks may be either sunken 10243–1 raised.

The total tolerances permitted are shown in Table 3 and Table 4. The height or the depth of an ejector mark, relative to the surrounding surface, shall not exceed one-half Figure 1043-1 Application of thickness tolerances to deep hubs14 BSI 12 January of the total tolerance permitted, unless stated otherwise on the agreed forging drawing.

The nominal diameter and the location of ejector marks will be indicated to the purchaser on the forging drawing before the commencement of production. Ejector mark 102431- are applied independently of, and in addition to, any other tolerances. Flatness tolerances relate to deviations of surfaces from the specified contour. Straightness and flatness tolerances are to be found from Table 5 according to the greatest length or greatest width dimension of the forging.

When no tolerance is indicated against the dimension concerned, the tolerance for the maximum length or width of the forging 10423-1 be applied from Table 1 or Table 2but the dispersion 102431 be plus and minus one-half of the total tolerance, and not as shown in the tables.

For centre-to-centre dimensions greater than 1 mm length, tolerances from Table 1 or Table 2, with equal plus or minus dispersions, shall be applied.

The centre-to-centre tolerances provided in this standard apply only when a straight line joining the two centres occurs within the profile of the forging see Figure Centre-to-centre wn shall be applied independently of, and in addition to, any other tolerances. Tolerances for fillet radii and edge radii are shown in Table 6 and examples of such radii are shown in Figure 10423-1 The minus tolerances do not apply to edge radii up to and including 3 mm when such em are affected by subsequent removal of draft by trimming or punching.

In such cases the 12043-1 tolerance is modified to allow for the formation of a square corner. Tolerances for fillet and edge radii shown in Table 6 are applicable to both grade E and grade F. Tolerances for the maximum permissible extent of burr relative to such edges are based on the weight of the forging, in accordance with Table 6 and are applied unless the purchaser specifies otherwise.

The location of burrs shall be indicated to the purchaser on the forging drawing for approval before the commencement of production. Figure 16 Dimensions to which centre-to-centre tolerances are not applicable 1024-31 than by negotiation Figure 17 Fillet and edge radii16 BSI 12 January Burr tolerances are applied independently of, and in addition to, any other tolerances.

They apply within the limits stated below unless the purchaser specifies otherwise. On forged surfaces which are to be machined subsequently, scale pits and enn dressing shall be permitted, but the maximum depth shall be such that at least one-half of the nominal machining allowance remains.

Dimensional checks regarding depth of scale pits or any other point in question should be made in relation to the machining locations. On forged surfaces which are not machined subsequently, scale pits and surface dressing shall be permitted to a depth equal to one-third of the total value of the thickness tolerance. Many instances of heavy die wear occur in which these tolerances are inadequate. The supplier will draw the attention of the purchaser to such instances and it will 102443-1 necessary to negotiate greater tolerances on the draft angle surfaces to meet these circumstances.